Weekend Reads: Less Than A Week `Til Turkey Day!

Posted by Maggie on November 20, 2021 in From the editors 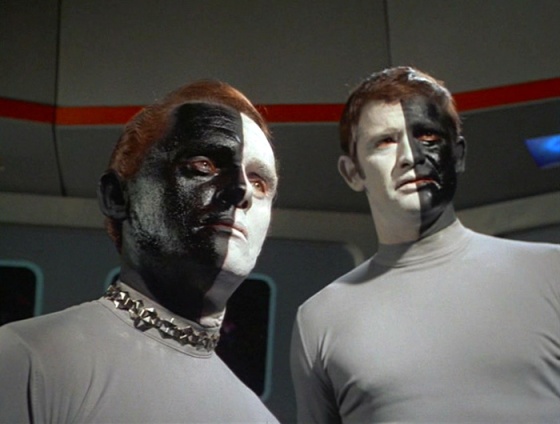 Have you ever seen this episode of the old TV series “Star Trek”? “Let That Be Your Last Battlefield” is the fifteenth episode of the third season of the science fiction series. Just a quick hint because you can seek and find the episode to watch. The basic plot of the episode is the deadly ‘racist’ hate between the two alien men because—- their black and white face colors are on opposite sides. It’s a bit like the racism disguised as “equity” we are experiencing in our society right now.

Meanwhile, our leftist betters contour to insist parents are stupid and ignorant, and should have nothing to say about their children’s education.

Christina Wyman: Schools face parents who want to ban critical race theory — and don’t get how teaching works: An educator’s top goal is to teach students to think. Parents who dictate curricula with their personal opinions, ideologies and biases hinder that goal.

Gonna stop you right there, Chrissy. There is a huge difference between teaching kids how to think and what to think. These curricula and these pushers of it are teaching kids ‘what’ to think. This is called ‘indoctrination’ for a reason, and accurately so. They are our kids, NOT “the state’s” as you so delude yourselves into believing and insisting. And it is our tax dollars paying your salaries and school supplies and programs/curricula … and so, parents absolutely have every right and supreme responsibility to intercede and involve themselves in their kids education and what is being fed to their minds. Please, we knew where the whole damn “Common Core” was going years ago. When “critical THINKING” and “logic and reasoning” were deemed wrong, and now part of “white supremacy”. #DefundTheSchools

Umm, no … It is sort of definitely not like that at all. And to be clear, the parents absolutely make medical decisions with doctors and surgeons about how their kids are treated, from medication to surgery.

UPDATE: I’m not the only one crashing down on Wyman’s ultra-asinine assertions concerning parental direct involvement in their own children…

A.J. Kaufman: No, Teachers Are Not Like Surgeons; Yes, Parents Can ‘Interfere With Curricula’

So in your analogy, I am forced to pay for the surgery, I don't get to question the type of surgery being performed on my child, nor can I request a different surgical team, & if during my child’s tonsillectomy I see that they are amputating her leg, I can't intervene? Hard Pass https://t.co/hqKEPPQQHJ

Even if teaching were akin to brain surgery, parents still switch doctors, seek second opinions, and refuse consent for treatments. A surgeon going around a parent’s wishes to perform surgery would be sued and probably lose his license. Teachers, like the arrogant Wyman, have lifetime tenure and frequently come from the bottom of their graduating classes. The two professions are wholly different.

“Parents, community members and politicians who aren’t qualified to teach should keep their noses out of school curricula,” the left-wing activist continued.

This is smug and nonsensical, but Wyman is an appalling radical with a sordid history of editorials, including, “I’m Catholic and I’ll never regret my abortion,” “Wearing a mask has given me a break from my crippling insecurity,” and “Confessing to your white privilege is not enough.”

That Wyman genuinely believes she and her colleagues have the same skill as surgeons, and parents should have no say in their children’s formation, says it all. It doesn’t take a rocket scientist (or a surgeon) to understand this…

The American communist’s most prized possession is his ability to teach your children to hate you, themselves, and their country. They’re scared to death you might discover this and take it from them.

Take it from them. https://t.co/ZxQh3QEIOg

Always. Always question the background ideology of these people trying to shame, bully, rationalize you out of your rights on every level. Their intentions are always nefarious. This really is a play for state possession of our children. Every communist country does it.

Phil Gramm and Mike Solon: Will Joe Manchin Stand His Ground on Inflation? Federal spending is its biggest driver. He has demanded an honest accounting, due this week.

If you are in shock over the verdict, get better news sources.

Twitchy: Townhall’s Julio Rosas has EXCELLENT advice for those who are ‘in shock over the verdict’

Guy Benson: Tucker Carlson: Here Is What Biden’s Relatives Told Me About His Cognitive Decline

Victoria Taft: How Unethical Were the Prosecutors Trying to Put Kyle Rittenhouse in Prison? Let Us Count the Ways…

← Kyle Rittenhouse “Acquitted” On All Counts
Sunday Newsfeeds: “This and Thats” With a Healthy Serving of Giblet Gravy →

One comment on “Weekend Reads: Less Than A Week `Til Turkey Day!”