Posted by Maggie on November 19, 2021 in From the editors 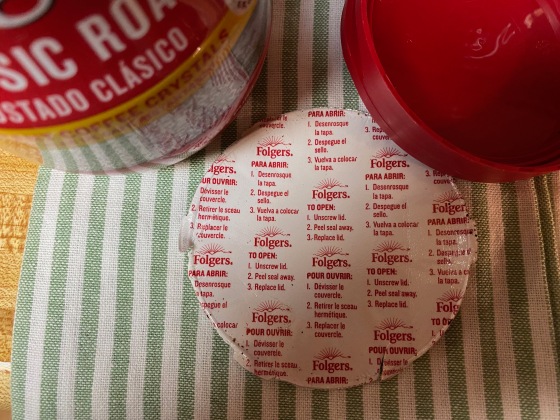 I’ve not bought instant coffee in a jar for, like, 30 years since my Grandma died. She drank it. I wasn’t a coffee drinker back then. I have been these last maybe 10 years, however, and I brew coffee in my coffee maker. A pot usually lasts me, and my daughter Lizzie, two days, as I pour the cooled coffee from the pot into a bottle and refrigerate for warming the next morning or for ice coffee. But I’ve been wanting to grab a jar for a quick cup when I’m not brewing and don’t have any in the fridge. Got a jar of Folger’s on sale at the store a week ago and decided not to brew a pot until tomorrow morning when Lizzie is home to enjoy it. I had to use it this morning. I discovered at 6:55am that it’s a damn good thing I’m smarter than the average Polar Bear or I wouldn’t have gotten to the ‘opening instructions’ on the interior safety seal (which atleast 30 years ago was either blank or just had the brand logo on it) in order to see ‘step one.’ I mean, seriously? Wow! “Unscrew lid.” Ummmm… Obviously this is coffee for Democrats. Duh-h-h-h-h.

A little under the radar, as they say…

Joe Biden is undergoing a colonoscopy at Walter Reed today

Kamala D. Harris is now Acting President of the United States of America

Brooke Singman , Paul Conner: Biden to transfer power to Harris while under anesthesia for colonoscopy at Walter Reed: Harris ‘will work from her office in the West Wing during this time,’ White House says … Must be said: Is this “it”? Is this when/how they remove his poopy pants from the Oval Office and seat her? Hmm?

Is anyone else seeing the irony of Kamala Harris becoming acting President because of a colonoscopy?

Kamala will be the first female president for a few hours today.

BREAKING: House Passes Massive $1.75 Build Back Better Bill. “The vote was close — 220-213 with a lone Democrat, Jared Golden of Maine, voting against the bill, along with all Republicans present.”

It still has to get through the Senate, where Joe Manchin and Kyrsten Sinema still show no sign of dropping their opposition.

Steve Moore: “I just feel sick right now at what these members of Congress have done to our country. This is a day of ignominy for the U.S. House of Representatives. This is a bill that will have lasting consequences for years. It’s a big government socialism bill…”

" Sen. Ben Sasse (R-Neb.) said in a statement. "This bill is a craptacular mess that will grow the deficit and lead to a million more annual IRS audits." https://t.co/OYaxkxEUom

Thomas Barrabi: Biden spending bill’s IRS tax enforcement plan will cause audits to double, House GOP memo says: Republicans say more audits will negatively impact low- and middle-income Americans … DO NOT be fooled into believing this is aimed at “the rich”. No, this is aimed at the working/middle class. Don’t doubt it.

“This is not a social spending bill; it’s a pathway to socialism.” – Kevin McCarthy

Is there an English translation for @GOPLeader McCarthy Floor speech?

You prefer it whispered to you in Chinese? https://t.co/gf7us9N7Gm

Tyler O’Neill: AOC allegedly interrupts McCarthy to say she voted for Biden to be a new FDR: Reporters have identified Ocasio-Cortez as the woman who interrupted Kevin McCarthy on the House floor … This isn’t comparable to FDR. This is F-ing Hugo Chavez.

Charles Payne: “It’s going to be extraordinarily expensive. We always talk about this as an economic thing. This is more about big big government and this is an effort to take the welfare society and move it up into the middle class. It really is. If you’re a college educated person who lives in New York, New Jersey, DC or California this is your bill. You’re gonna get tons of money… If you live in elite states this is your bill. This is nothing about poor people or won’t help poor people…”

VIDEO: FOX Business host Charles Payne: Democrats aren’t being honest about massive spending bill: Argues Build Back Better will pile onto the debt and move the ‘welfare society’ into the middle class.

Instead of wasting money on tax breaks, loopholes, and tax evasion for big corporations and the wealthy, we can make a once-in-a-generation investment in working America.

And it adds zero dollars to the national debt.

Daniel Greenfield: Don’t Ask About Empty Shelves, Our Leaders are Too Busy Saving the World: What makes world leaders who can’t fix the most basic problems think they can change the climate?

The other big story: The Rittenhouse jury is still out in deliberations:

Andrew McCarthy says ‘the jury should have been sequestered before deliberations’. Death threats, and last night’s MSNBC reporter/photographers’ failed attempt at doxxing the jury are proof of that.

← Thursday Newsfeed: Actually, We Need Vaccinated Against All the Other ‘Viruses’ Infecting Our Country
Kyle Rittenhouse “Acquitted” On All Counts →

One comment on “Friday Newsfeed: Strong Brew and Stiff Drinks”