Today, April 24, marks the “Great Crime,” that is, the genocide of Christians—mostly Armenians but also Assyrians—that took place under the Islamic Ottoman Empire throughout World War I. Then, the Turks liquidated approximately 1.5 million Armenians and 300,000 Assyrians.

Most objective American historians who have studied the question unequivocally agree that it was a deliberate, calculated genocide:

More than one million Armenians perished as the result of execution, starvation, disease, the harsh environment, and physical abuse. A people who lived in eastern Turkey for nearly 3,000 years [more than double the amount of time the invading Islamic Turks had occupied Anatolia, now known as “Turkey”] lost its homeland and was profoundly decimated in the first large-scale genocide of the twentieth century. At the beginning of 1915 there were some two million Armenians within Turkey; today there are fewer than 60,000…. Despite the vast amount of evidence that points to the historical reality of the Armenian Genocide, eyewitness accounts, official archives, photographic evidence, the reports of diplomats, and the testimony of survivors, denial of the Armenian Genocide by successive regimes in Turkey has gone on from 1915 to the present.[…] 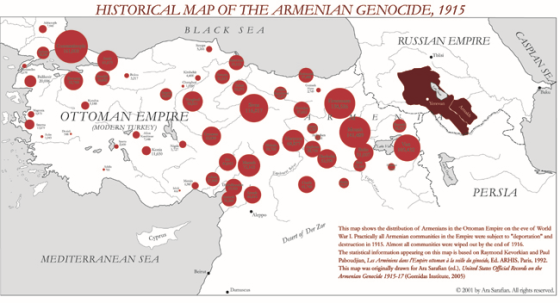 There were massive death marches. 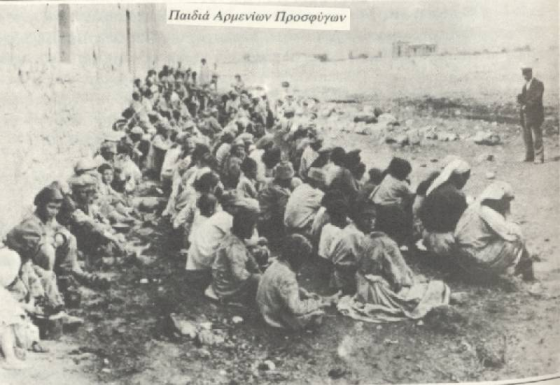 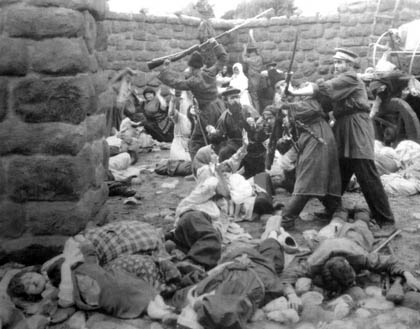 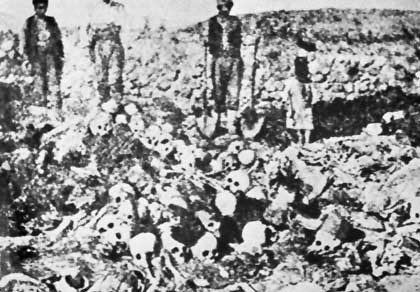 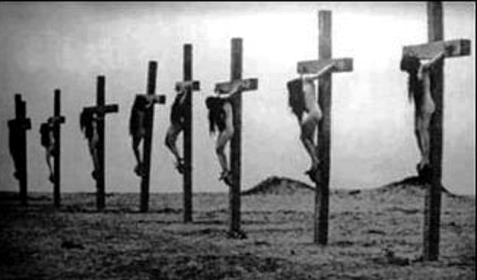 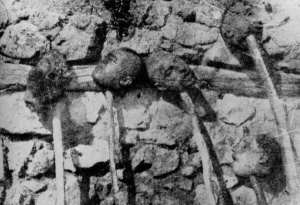 And it was religion/ideology-driven genocide that, to this day, has its own set of deniers including Turkey and Turkey’s government today who insist it did not happen because Muslims are not capable of such things. Hitler allegedly claimed he could get away with his Jewish Holocaust twenty years later in WWII because Turkey had gotten away with theirs in WWI…

(WSJ) – Pope Francis described the 1915 mass killings of Armenians by Turks as the “first genocide of the 20th century” on Sunday, touching off a diplomatic furor with Turkey and entering into a tense historical debate with wider implications for the Vatican’s relations with Islam.

Turkey, which has long rejected the term genocide to describe the killings, swiftly called its ambassador to the Vatican back to Ankara for consultations after the pope’s remarks. Turkey’s foreign ministry also summoned the Vatican’s envoy to Ankara, informing him that the government was “disappointed and saddened” by the pontiff’s comments, according to Turkey’s state-run Anadolu news agency.

The pope, speaking at a mass in St. Peter’s Basilica to mark the 100 years since the killings, addressed the massacres in the context of the contemporary persecution of Christians in the Muslim world. That subject has become an increasingly pressing theme for Pope Francis—who, before becoming pontiff, had close ties to Buenos Aires’s overwhelmingly Christian Armenian community.

Even as he has continued to call for better relations between Catholicism and Islam, the pope has urged Muslim leaders to denounce the actions of extremists and pushed Christians of different churches to stand together in the face of anti-Christian violence.

The pope’s statement is a boost for Armenia’s decadeslong campaign to define the killings as genocide, as well as a setback for Turkey’s efforts to fend off the accusations of systematic killing.

Armenians—the vast majority of whom are Christians—say that as many as 1.5 million Armenians were systematically killed during World War I in today’s eastern Turkey, which was then part of the Ottoman Empire.

A number of countries officially recognize the killings as genocide. But Turkey contests Armenian claims about the scale of losses; it argues that hundreds of thousands actually died in warfare and famine, and that many Turks were also killed by Armenians. Turkey argues that the question of genocide should be left to historians rather than politicians.

Pope Francis said Sunday that “it is necessary, and indeed a duty,” to “recall the centenary of that tragic event, that immense and senseless slaughter whose cruelty your forbears had to endure…Concealing or denying evil is like allowing a wound to keep bleeding without bandaging it.”

Turkey accused the Vatican of using history for political aims: by singling out Armenians and not mentioning all lost lives in Anatolia during World War I. Prime Minister Ahmet Davutoglu said the comments were “not fitting of the Pope.”

“The Pope’s declaration, divorced from historical and legal facts, is unacceptable. Religious posts are not positions to stoke hatred and grudges on baseless claims,” Turkish Foreign Minister Mevlut Cavusoglu said in a message from his official Twitter account.

The Armenian Genocide and my grandmother’s secret

Decades ago when I was very young, my grandmother, Mary Kupelian, told me a haunting story I’ve wondered about ever since.

As I sat in the kitchen of her cozy little home in Bethesda, Maryland, eating her delicious homemade bread and talking about a frequent topic – the Armenian Genocide, which she and my dad (as a little boy) had barely survived – she shared with me the following enigma.

It is the forgotten 20th-century catastrophe. In 1915, under cover of world war, Ottoman Turks wiped out a third of the Armenian population. To this day, Turkey denies blame – and, behind it, Britain stands firm among a dwindling band of nations that fail to acknowledge the massacres were genocide